The pro star league in a nutshell was an event organized and run by human beings. And as with any other events, there were funny incidents, some intentional but mostly unintentional, that made the fans more entertaining to watch.

Casters and commentators are human beings too and we’ve all seen somewhere before a national television news main anchor burst into laughters on live due to some unexpected cue that stabbed the right giggling point of the anchor’s mind. I’d say the caster-commentator battery in the esports league had such incidents more often, being an entertainment industry you know — let’s cut them some slack, yeah? But these had more positive effects than one might think because, I mean, we were watching the match for entertainment anyways, why be so serious about some giggly episode by the them? We enjoyed.

Many of the funny episodes had to do with the language itself, i.e., sudden tongue twisters, unintentional statement that sounded like a slang, and etc. But this one episode was caused by the pro athlete, who got so nervous that day I’m sure, that he mistakenly placed the headphones completely inside-out. The speaker part of the headphone was facing outwards. And the poor guy didn’t even notice that!

This caused the caster and the commentator be in a silent mode on audio, but soon you can see that they are holding their breath not to burst into tears with laughters. As the awkward silence continues, the one relatively “sober” commentator who realizes that this could turn south soon says to the breath-holders “bros, you gotta chill out”. This incident became a legend in Korean esports broadcasting. Please watch it youself.

Just like a footballer scoring a goal would perform a victory ceremony in front of their fans in the field, some Starcraft athlete did the same. Now it’s worth to mention that the common ceremony practice after winning a match would either be a post-home run baseball ceremony style, i.e., gently high-fiving his team mates as he goes back to his seat, or no ceremony at all.

But some players, such as Lee Sung Eun, with a true entertainment mind would intentionally perform a ceremony right in front of his just defeated opponent. Probably not the best day for the defeated, but for the fans, it was certainly more entertaining to watch. 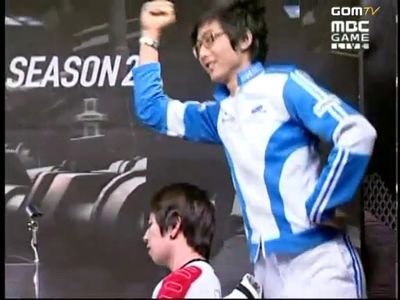